If you've made a UserTest on Browserscope, you know that one of the first things you want after doing the work of getting your test right is to see some real data! So you fire up a couple of browsers and boom, you've got a few rows. But that's not very likely to give you the spread that you're looking for. More often than not, because of its market share, I really want IE results. Yeah, I have 4 VMs I can fire up, but all in all that takes too damn long.

Enter today's WebPagetest.org integration! Now, from your settings page on Browserscope, there's a blue button you can use to trigger an IE 6, 7, 8, & 9 to automatically visit your test URL. We append a URL parameter (autorun=1) to your test URL so that you can be sure your test is being run under this context. Otherwise, it's generally better/nicer to use a button and prompt your user to run your test. ;)

Additionally, there's now a control in the results table that allows you to navigate through the browser lists as well as compare results for particular UAs and filter sparse results (results with some test count < X).

Hopefully these changes and improvements will help you to gather and navigate your data more easily.
Posted by elsigh at 4:48 PM No comments:

From the beginning of the Browserscope.org project we've wanted to come up with some visualizations that are more exciting than the compatibility tables. This week we've enabled two new ways to look at the data based on comparing browser releases over time.

The timeline visualization uses Highcharts JS which lets us plot splines with irregular intervals, a feature that several other timeline visualization libraries I looked at didn't offer. As you browse the categories on the site, you'll now get timelines above the results tables. Here's a timeline graph of Collin Jackson and Adam Barth's Security test results:

In general, things are looking up and to the right, which is a really good sign for the web. =)

You can get timeline visualization for any of browserscope's tests by hitting www.browserscope.org/timeline?category=[summary|security|richtext2|selectors|network|acid3|jskb].

This visualization also works for User Tests, which makes for some pretty cool graphs - check out the Modernizr timeline and their full compatibility table with automatic scoring and cell highlighting.

Additionally, I've been working with a really awesome developer named Nihar Kabinittal on a different visualization of this data - sometimes the timeline isn't enough fun. Our primary goals were to make a graphic that would be flexible to allow comparison of multiple browsers and versions and that would be instantly grokkable by both geeks and non-geeks. So here it is - this is Modernizr's data for top desktop browsers on Nihar's evolution visualization: 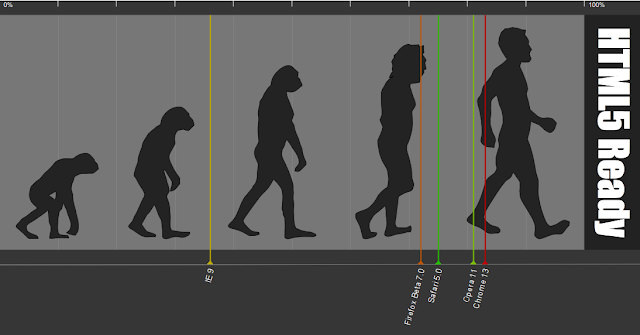 Want to build your own Browserscope test or create a visualization with the data? Learn more by reading the HOWTO.